Australians Love Their Tea with Bickies and Coffee Too 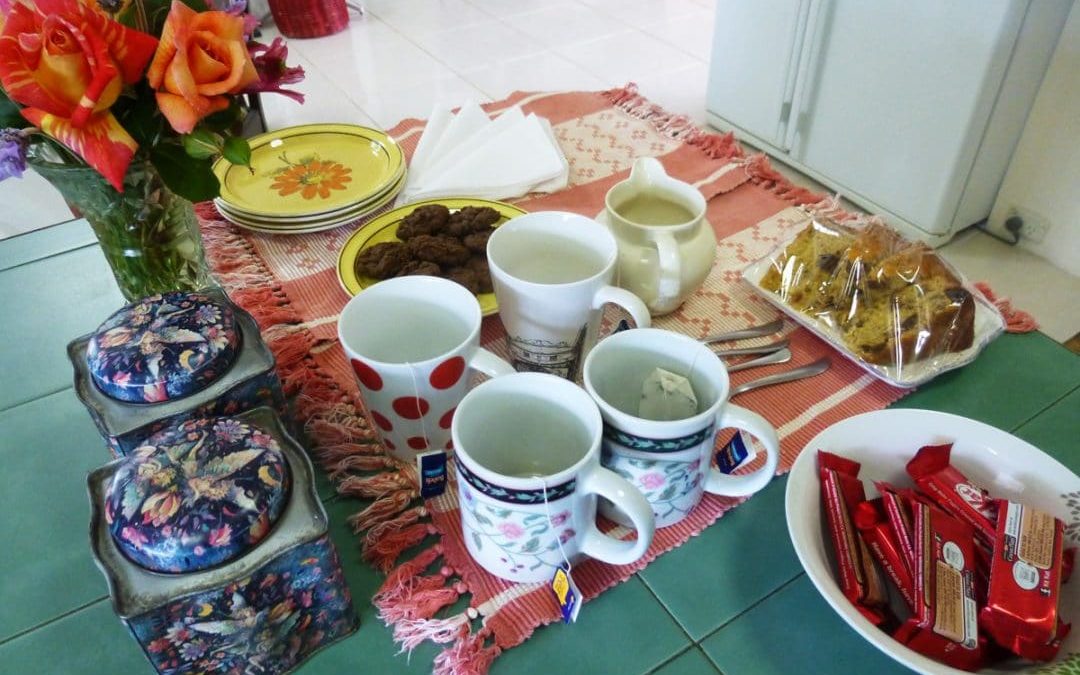 Since I knew that Australia was originally settled by the British, I assumed that they drank tea there. I have enjoyed a cup of tea with breakfast for many years, so I was looking forward to travelling to Oz and the fun of learning what kind of tea they drink and how they drink it.

It seems that in Australia, most every event includes tea. “Having tea” can have quite a few different meanings, one being a full meal. The question, “what’s for tea?”, can mean, “what is for dinner?”. But, it can also mean, what snack are we having with our tea? There is always some food eaten with tea, even if it is just tea and a bickie. “Bickie” is the nickname for biscuit, but it is not what Americans would think of when we hear “biscuit”. Bickies are what Americans call cookies and are always sweet. They can be plain like shortbread or milk toast, or covered in chocolate or may have some type of cream filling.

For our housesit in Western Australia, the homeowners have had a long standing tradition of hosting a Scrabble game on Tuesdays. Like all get-togethers, tea is involved. The way it is done, is that we play a game of Scrabble, have tea, and then play another game of Scrabble. Everyone who shows up to play, brings a small plate of something to have with tea. It may be some store bought bickies, or homemade. It is most often something sweet but it can also be savoury. As the hosts of the event, we also provide a small snack to share with the tea.

The drink itself is usually a cup, a teabag and boiling water. Most Australians have milk in their tea, some also have sugar. In Australia, tea is served at events such as gallery openings, store openings, and performances, as well as at markets. If you want to make a new friend, you will usually invite them over for tea.

On the day we play bowls, tea is taken after the first 10 games. The bowls equipment (stored in a cupboard in the hall where we set up the game) includes a huge hotpot as well as a container of tea bags, one of sugar, a carton of milk and a box of bickies. A few folks prefer coffee and there is a jar of instant for them.

In a restaurant or cafe, the tea service is quite a production. When someone orders tea, they are usually provided with a cup and saucer, a tea pot filled with boiling water, a second pitcher of boiling water, and loose tea in a small strainer sitting in a tiny cup to catch the drips. Also included is a pitcher of milk and a sugar bowl. The idea is to dump the tea into the pot and let it steep. When it is to your liking, you pour the tea into the cup through the strainer to catch the loose tea. The second pitcher of hot water is used to make a second pot of tea if you so desire.

Australians seem to drink tea throughout the day. They will often have it at breakfast, then have a morning tea time, tea with lunch, and afternoon tea time and then dinner with tea afterwards. Of course not everyone drinks that much tea, but based on our experiences, it is quite common.

Coffee is also popular in Australia and usually goes with cake. In fact “coffee and cake” is often advertised in restaurants with one price. When folks get together with friends, they will often go out and have “coffee and cake.” It seems that while tea is an everyday event, and often drunk at home, going out for coffee and cake is somehow seen as more special in Oz. From a recent article, we learned that when Australians drink coffee at home, it is usually instant coffee.

Another difference from America, that we have found is that Australians don’t drink iced tea. If you order iced tea in a restaurant they will make some hot tea and pour it over ice, which of course, makes a very week brew. And Aussies don’t drink iced coffee either, at least not what Americans would call iced coffee. In Oz, iced coffee always includes a scoop of vanilla ice cream and whipped cream on top. It is more a dessert than a drink! Laurie has now taught a number of Australian barristas how to make a real American cup of iced coffee, and most were happy to learn how.

Part of the fun of travelling is learning about the customs of people in different places. Since the drinking of both tea and coffee is steeped in tradition in many parts of the world, it is particularly interesting to explore these differences. Of course, joining in and doing things the way the local do it is the most fun. And taking time to have a cuppa and a bickie makes for a nice pick-me-up any time of day.

← Trials On The Art Trails- in Western Australia A Guide to Bacon Styles In the US, Australia and the UK →
